This industry consists of firms which manufacture and assemble aircrafts, spacecraft and missiles. Aerospace companies take on workers with different levels of education and skills – from scientists – to assemblers – to mechanics. The work which is required can vary from plant to plant
The industry is rapidly developing due to many new discoveries occurring every year. This has resulted in increased employment opportunities for scientists, technicians and engineers. They may do tests on models of new aircraft designs. In addition to aerospace engineers, chemical, industrial, mechanical and electrical engineers are also employed in the industry
Many machine tool operators and machinists are employed in the industry, especially in plants which make propellers and engines. Related jobs include jig and fixture builders and tool and die makers. Other employees have metalworking jobs, such as riveters, tube benders and welders. Heat treaters, platers and painters may finish metal parts
Large numbers of employees are hired to assemble and install parts or complete components for missiles, aircraft or spacecraft. Assemblers join tails and wings to the body or fuselage of an airplane. They also install equipment like flight controls
Salaries very greatly depending on the exact nature of the job, but start at around £20,000 and can go up to £80,000 for the top scientists.

Aerospace engineers are required to research, design and manufacture satellites, space vehicles, aircraft, missiles, among other devices and machinery. They apply their knowledge to create sophisticated products and they may be specialised in fuel, hydraulics, engines, airframes, materials and structures, and pneumatics. They are also responsible for improving and maintaining older aircrafts across the world.

People who want to be Aerospace engineers must study a degree in aeronautical engineering or aerospace engineering. Other routes for this area are having a Higher National Certificate, Higher National Diploma or a Foundation degree in engineering or technology plus a Bachelor degree level. Aerospace and aeronautical degree courses last three years for a BEng level and four years for a MEng. Entry requirements are three A levels/four H grades and five GCSE’s grades (A-C/1-3) including science, math or equivalent subjects.

There are some institutions such as RAeS, Institution of Mechanical Engineers, and Institution of Engineering and Technology that offer scholarships for part or all degree programmes.

Overview According to our data, these are the percent of job offers for aerospace.

Companies According to our data, by number of offers, these are the top companies that are hiring for aerospace.

Job Types According to our data, in percentages, these are the top job types available for aerospace.

Categories According to our data, by number of offers, these are the most popular categories for aerospace.

Cities According to our data, by number of offers, these are the top locations to get hired for aerospace.

Salaries According to our data this is the average salary range offered for aerospace. 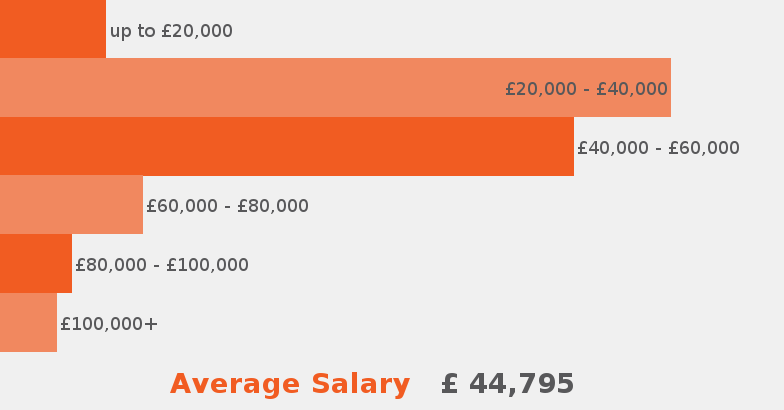